Start a Wiki
“I wanna be the President!” — Tunt's aspiration

Tunt Cunt is the biological child of Cunt, and adoptive child of Jannis Topland. Tunt was born of a surrogate mother after Cunt donated sperm to a bank. It was adopted by Jannis Topland as a replacement for her dead son Dexter Topland. The Tunt Life follows the misadventures of Tunt, as it documents the mistreated pets, often absent mother, and it's dream to become president.

Tunt began as a successor to Cunt, after his death. The proclaimed "Son of Cunt" was created by Adam, Bruce, and James to be a replacement for Cunt. Created to be the ugliest, saddest, but good at heart child, Tunt began it's life, with adoptive mother Jannis.

When Tunt was first created he strongly resembled his father Cunt apart from skin complexion and tendency to wear lipstick. Later in life when he grew to become a teenager he let his hair grow out into a majestic ponytail as he rebelled against society's rules. Along with his facial makeup and bodybuilding physique Tunt was shaping up to be a fine specimen indeed. Finally Tunt then became an adult: his hair was dyed dark red along with his body hair until he resembled bigfoot or some kind of yeti, his abs developed substantially, and his signature facial makeup was a thing of the past. He became an icon.

Tunt's life had it's ups and downs, his childhood and much of his young adult life took place in a small shack under a suspension bridge in the city of Bridgeport. It was a stressful upbringing due to the fact his adoptive mother Jannis more or less rejected him as she descended into a life of drink and depression but yet Tunt stayed optimistic and got himself through school, barely. When he reached his teenage years life got very much more difficult, he took a part time job at the city graveyard. Work began at 12:00am and got home around 7:00am, an hour before school starts. This meant that Tunt was deprived of sleep and became very deppresed and strained due to his all work and no play (or no sleep) lifestyle. This combined with the fact that Jannis rarely went to work at the military and on one occasion packed her bags and went on holiday leaving Tunt to deal with all the issues of family living. However, Tunt found a new hobby in these tough times. Collecting people. Elspeth and three other of Tunt's acquaintances were locked in the Tunt family basement, this brought a joy into Tunt's rather tedious life.

In adult-hood Tunt's life became much more exciting. Following graduation of school Tunt went to University to study in his pursuit to become the leader of the free world - President Tunt. Just like his Father before him, Tunt had a dream but first he needed to have sex with a woman. In university Tunt found love and in turn lost his virginity to a young Japanese girl called Ayana Yuki. Love blossomed however, when Tunt realized university wasn't for him, since he didn't really know what university was. Without realizing he left Ayana and returned to Bridgeport.

“Yale's not a university, it's a summer camp for rich kids.” — Joel commenting on Tunt's road to the oval office.

Once he arrived at Bridgeport and said hello to Jannis they were off again and this time to France. Tunt equally did not last long there either due to the fact that there was no Eiffel Tower. Tunt then set his sights on Isle Paradiso where he could pursue a new dream, to own a houseboat and become an evil criminal...and then a ghost buster. Tunt and Jannis enjoyed their new life in paradise. However, once again it was short-lived. Jannis reached her elder status and Tunt felt it was time to move house once again. Sunset Valley was the ideal place for Jannis to retire and for Tunt to do what Tunt does best... I'm not sure anything really. Finally Tunt had found a place he could truly call home but first he went on vacation to China; grew tired and went back home; started a protest movement and gave up on it a second later; bought a stretched comical future car for many thousands of simoleons and thus was the Tunt life. A strange life for a strange man. 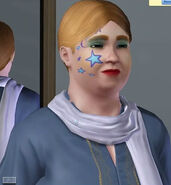 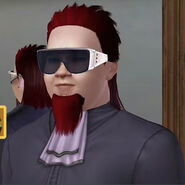 Adult Tunt
Add a photo to this gallery

Retrieved from "https://inside-gaming.fandom.com/wiki/Tunt?oldid=6581"
Community content is available under CC-BY-SA unless otherwise noted.