Start a Wiki
“I wanna be an actor.” — The line that started it all

The Sims series formally began on the 13th of July 2013 following a steam roulette episode entitled 'WE ARE GOD! (Pervert Edition)" in which Sims 3 was selected. Adam, Bruce and James created a miserable, clueless and lonely character called...Cunt. Surprisingly Cunt and his misadventures was a big hit and the Steam Roulette episode in question ,which gave birth to the Cunt Life series, is rated the 12th most popular video on the Inside Gaming channel surpassing half a million views. Since then Cunt and Tunt have been a huge part of the channels identity.

With the launch of The Sims 4 came The Munt Life, featuring Tunt's French cousin Munt. Featured in a craigslist ad, the IG household were tricked into believing Munt would be a sexy and patriotic new "female" member of the team. However she only posted images of her excuisite lower body. They soon learned looks can be deceiving and that Munt is something that can't simply be overlooked. Munt has the face of a boomerang and a body of a model.

Are you John Connor?

I miss my dad 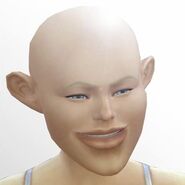 Come to my cave, children!
Add a photo to this gallery

Retrieved from "https://inside-gaming.fandom.com/wiki/The_Sims?oldid=6716"
Community content is available under CC-BY-SA unless otherwise noted.