Spoole is Inside Gaming's resident pot head. In actuality, Spoole is one of IG's producers/editors. His appearance and demeanor often causes the staff to claim he's high. Spoole's just a chill guy, who can often be seen hosting the ETC news show.

Good ol' Spoole looks like the average pothead you can see in your neighborhood. But unlike most other potheads, he is a very friendly and helpful citizen. In his local neighborhood he is known as "the friendly next door stoner". His trademark are his supercool baseball caps he never ceases to wear. Spoole even swore to wear them after his death and demanded to be equipped with at least one hat in his coffin after he dies. Unfortunately, Spoole isn't as athletic as most of our beloved IG crew but he makes up for that with his indisputable wisdom, which he gains through smoking weed of course.

Spoole's history remains elusive as he one day just happened to walk into Machinima and instantly wanted to apply for a job at Inside Gaming. But, much to his surprise, they put 'Spoole into ETC. There he's now working as an editor and co-host, with minor guest appearances at IG.

Nobody actually knows how Spoole was created as he himself forgot everything about his past due to a major weed-fest at his cousins house. However, it is said that Spoole descended right from heaven, just like Jesus, through god, after he exhaled the smoke of his first J. 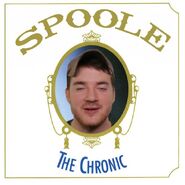 Spoole without a hat. I can die peacefully now.

The ETC crew with Spoole buttfucking Elliot in the back.

Better than the Bang Bus? No, but still interesting.

Retrieved from "https://inside-gaming.fandom.com/wiki/Spoole?oldid=6455"
Community content is available under CC-BY-SA unless otherwise noted.