Rogue Warrior began as a backup game to a game called Planet Alcatraz. Planet Alcatraz was so bad the gang could only stand it for so long. Growing bored, they decided to switch over to Rogue Warrior. Knowing how infamous it was for the bad game play, and endless stream of obscenities, they switched over, and never looked back.

The story follows Navy SEAL Dick Marcinko as he fights his way through North Korea and eventually through the Soviet Union. The story is something about Soviet missiles in North Korea. Marcinko ends up stopping a Soviet plan to shoot down American nukes, if they were fired at the USSR. The game ends with Marcinko jumping off the Red October to meet his commanding officer and they leave. Marcinko then is sent to prison for almost starting WW3. 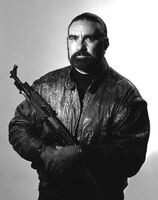 One of the many "pinko commie bastards" Marcinko meets on his travels.
Add a photo to this gallery

Retrieved from "https://inside-gaming.fandom.com/wiki/Rogue_Warrior?oldid=6558"
Community content is available under CC-BY-SA unless otherwise noted.