Start a Wiki
“You ever slice the ear off a baby cow?” — Anvil trying to molest Mikey

Mikey Conway is a minor character in Ride To Hell: Retribution and brother to psychopath Jake Conway.

Mikey Conway, as described by his brother, is a sack of shit. He is like his brother, in that they both have black play-dough for hair. Mikey just wanted to go with his girlfriend to see Bands. This plan went astray when his chronic masturbator of a brother returned from jerking it in a parking lot and calling it Vietnam. Mikey was almost molested by Colt and Anvil when going to get burgers at a diner called Bands with his brother. This is when shit got crazy, Anvil and Colt noticed that he was wearing a jacket and to go away then come back. This lead to Mikey's tragic death from the hand of some guy with the weirdest irish accent ever. Jake vowed revenge for Mikey's death, but ended up mainly jerking his gherkin in a parking lot thinking about prostitutes. 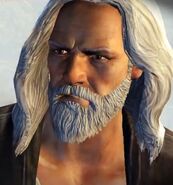 Retrieved from "https://inside-gaming.fandom.com/wiki/Mikey_Conway?oldid=5280"
Community content is available under CC-BY-SA unless otherwise noted.