“I was no use at all.” — Classic incompetent Mack.

Mack is a character from Ride To Hell: Retribution. He is the uncle of Jake and Mikey Conway, at least that's what he pretends to be, judging by his looks, he could also be a homeless biker who's just stalking Jake. Anyway, Mack's part in Ride To Hell is to kind of be a mentor to and help Jake avenge the death of Mikey.

It's safe to say that Mack could be just any old hobo you see every day on the street, but, in Ride To Hell he is basically just that with the exception that he is somehow related to Jake and Mikey.

He wears the same cloths as Jake, an old and scruffy biker jacket, and an ugly and dirty biker tank top with hideous biker shoes and shitty pants. Additionally, he looks really old with his white long hair and full beard, almost like santa, a dirty, stupid, criminal, and junkie santa. 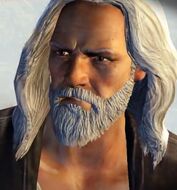 Mack in his younger years. Oh wait that's Jake sorry.
Add a photo to this gallery

Retrieved from "https://inside-gaming.fandom.com/wiki/Mack?oldid=6545"
Community content is available under CC-BY-SA unless otherwise noted.