Start a Wiki
“What do you think Lawrence?” — The common segue into Lawrence

Lawrence Sonntag is the backboner, and local talking headset, of Inside Gaming. Lawrence functions as the ducker, fast checker, and talking HELL of the news show. Lawrence is rarely seen in person, instead he often communicates from over a laptop.

“Lawrence currently maintains the IG blog and creates the IG newsletter. He likes industrial music, Dire Straits, Earthbound, and just about every game ever made. Despite a degree in Computer Science, he is now a full time freelance writer and will do just about anything for a paycheck. Just about.” — Lawrence's, highly suggestive, bio at Inside Gaming.com

One cold winter day, a computer gave birth to a magical creature that she called Lawrence. He was able to transform between a standard laptop and a human male. He has no memory of his childhood because he had to delete those files for more space.

Origin Of The Talking HeadEdit

After Lawrence moved from LA to his hometown Cincinnati, he couldn't appear in person anymore, when there was stuff to videotape at the studio. Bruce's idea was to just put him up on Skype so that they can still communicate before any show. Bruce forgot to hang up on Skype and the crew started to make the video, when suddenly Lawrence corrected them on a wrong statement they made. The guys thought this was a pretty funny little gimmick, so they used it every time they made a video. 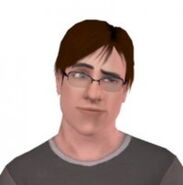 Lawrence as a Sim 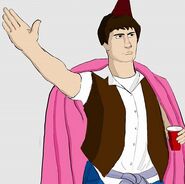 Hail Lawrence.
Add a photo to this gallery

Retrieved from "https://inside-gaming.fandom.com/wiki/Lawrence_Sonntag?oldid=6423"
Community content is available under CC-BY-SA unless otherwise noted.