“Cancelled!” — The common wrath of Joel

Joel Rubin is Inside Gaming's resident manly and tough type. Joel is mainly a man who works behind the scenes, acting as the Inside Gaming manager and producer, but when he does show up things get fabulous. Despite this, Joel is just as important as the rest of the gang.

“Individually, I love you all with affection unspeakable; but collectively I look upon you with a disgust that amounts to absolute detestation.” — Joel's bio on Twitter (@HarmonyGrits)

“Joel takes great pride in working at Inside Game. He is love of Video Games from his childtime, when he gamed on the original Nintendard Entertainment Sister. Now that Joel is Adam & Bruce, they work to videos excellents. Many thanks to all the dozens of views, and onward to Gaming History!” — Joel's, rather heartfelt, bio at Inside Gaming.com

Joel is the Big Boss at Machinima and Inside Gaming. He has the big nuts around the office and will punish anyone who doesn't bow to him. 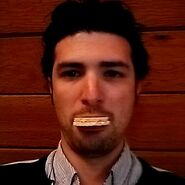 Are those rice cakes? 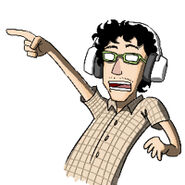 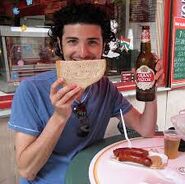 Its all true ladies
Add a photo to this gallery

Retrieved from "https://inside-gaming.fandom.com/wiki/Joel_Rubin?oldid=5861"
Community content is available under CC-BY-SA unless otherwise noted.