James Willems is the resident third wheel of Inside Gaming. Known for his game commentary on terrible games, and lack of nipples. James can often be seen on streams with Adam and Bruce, riffing on games.

James is the cynical man of Inside Gaming. Known for cutting games to shreads, and his mockery of them.

“James Willems is a lifelong fan of videos games and inappropriate humor. Naturally, he ended up on Inside Gaming to sing the praises of Psychonauts and mock ARMA. More than once he’s been described as dashing AND daring; courageous and caring; faithful and friendly; with stories to tell. He’ll march through the forest and sing out in chorus. Marchining along as his song fills the air. GUMMI BEARS BOUNCING HERE AND THERE AND EVERYWHERE. HIGH ADVENTURE THAT’S BEYOND COMPARE HE IS THE GUMMI BEARS.” — James' Bio...According to Inside Gaming.com

James used to work on Attack Of The Show! with Bruce for a few months or whatever. He left there and was homeless (not really) for a couple of years. He then worked at Machinima after Bruce begged him to join. He has been an intern ever since.

James is often heard as an off screen voice on the news show (usually making fun of a terrible game).

While on the Inside Gaming channel James is often in the background with Bruce riffing on games. 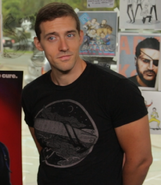 Stop! I can only get so erect.

Ready your bagpipes.
Add a photo to this gallery

Retrieved from "https://inside-gaming.fandom.com/wiki/James_Willems?oldid=6087"
Community content is available under CC-BY-SA unless otherwise noted.