There once was a Navy SEAL so elite he created a unit just for himself. He kidnapped Admirals and infiltrated US military bases. This SEAL's name Richard Marcinko. Dick Marcinko AKA Rouge Warrior aka Demo Dick aka Shark Man of the Delta is the protagonist of Rogue Warrior. He is the Navy SEAL who runs completely not rogue through half of North Korea to kill as many commie motherfuckers as possible.

Good ol' Marcinko could be first seen in the live stream from July 30th 2014. After Adam, Bruce and James had enough of Planet Alcatraz they fired up Rogue Warrior which features the life of Dick Marcinko. Thanks to the overwhelming and unnecessary amount of swearing in the game, gory finishing moves and horrible game mechanics, it turned out to be a real video-game gem.

Dick works as a Navy SEAL and has to invade North Korea and Russia to embark on a rogue genocidal campaign. On his way through the woods and swamps of North Korea, he murders dozens of North Korean soldiers, in a handful of communist headquarters completely on his own. Wait, that was Rambo.

His main weapon against the commie motherfuckers is his insanely advanced swearing skill. The North Koreans and Russians are so afraid of Dick's lingual skills that they instantly spasm out as soon as they see him. Other weapons Dick Warrior uses are guns like assault rifles, MGs and grenade launchers. Another favorite armament of Dick is his knife, which he uses to perform rectal exams on his commie enemies.

After Marcinko successfully finished his war campaign and returned to the states, he was immediately put into a mental asylum. Doctors found out that Dicky had a severe case of Tourette syndrome and had to be pacified. Since then, he lives in a padded cell where the medics installed several dolls representing communist North Korea and Russia. As a therapy, Marcinko is allowed to swear at them whenever he wants. 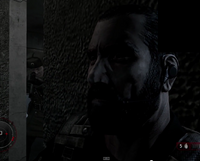 Dick showing off his stealth skills.

Marcinko making friends with the so called pinko commie bastards.

Rogue Dick helping a mechanic with his back problems. 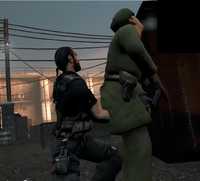 Dick Warrior perfoming one of his famous prostate exams.
Add a photo to this gallery

Retrieved from "https://inside-gaming.fandom.com/wiki/Dick_Marcinko?oldid=6723"
Community content is available under CC-BY-SA unless otherwise noted.