The game Chaser follows the story of John Chaser, as he shoots through everything that crosses his path, to fulfill some poorly thought out revenge plot. On his journeys, Chaser must face his past, indiscriminately kills people, fights soldiers in goof suits, runs into walls, goes to mars, and fails at being James Bond. Through his travels, Adam, Bruce, and James tell a saga about the rise and fall of game developer Jo Wood. It's Chaser time!

Chaser was another Inside Gaming series, alongside The Sims and SiN Episodes Emergence (Blade), to be born into greatness as a result of steam roulette. The first episode in which the Chaser game appeared was not even the main focus of the video with Duke Nukem taking the spotlight, entitled 'DUKE NUKEM SUCKS'. That episode aired on the 29th of November 2013 and was completed on 17th December 2014. Alongside The Sims, Chaser is one of the longest running game lets plays in Inside Gaming history.

The game has an active multiplayer scene. However, GameSpy Arcade stopped supporting the game in 2012, this means that no game servers show up under the multiplayer tab of the game's menu. The multiplayer community (active since the game's release in 2003) created their own multiplayer launcher which lets players view, join and create their own servers. Despite the game's infamous glitches in the story mode, the game can be easily modded and patched, allowing for a more stable experience, as developers from the community have achieved.

There are 12 official maps and over 300 community made maps. There are four different game types: 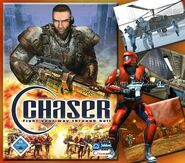 The official soundtrack to garbage

The box art to Total Recall the Game!

This must be Bands
Add a photo to this gallery

Retrieved from "https://inside-gaming.fandom.com/wiki/Chaser?oldid=6527"
Community content is available under CC-BY-SA unless otherwise noted.