“It's like Skyrim with guns” — Kovic's famous words on Farcry 3

Adam Kovic is the leader and face of Inside Gaming. This mainly entails Adam having to endure Bruce's humping, and suffer through the terrible games they play.

Adam is the resident straight man of Inside Gaming. He offsets the wackiness of Bruce, and cynicism of James. While he is the straight man Kovic is the quietest of the trio, usually focused on playing games. He is usually seen accompanying his so called "bitch face" which he calls his rested face. Many jokes and fan art imitate him as a emotionless person and as pikachu.

“Born to a family of some sort, Adam grew up around videogames maybe. After dropping out of what he thought was a college he went to work at some dump that was across the street from another dump. At that second dump, Adam found out about a place called MAACHEENNEMMMA. Seven years later he’s still here doing what he loves: Bruce.” — Adam's Bio...According to Inside Gaming.com

Adam Kovic started co-hosting the Machinima series Inside Halo, which didn't do that good considering there wasn't a lot of Halo news, eventually he started hosting it all together. This show fell out and was cancelled in 2012. This lead to him hosting the successor to Inside Halo, Inside Gaming Daily, where he has been ever since.

Kovic is the co-anchor of the Inside Gaming Daily new show, with Bruce. He is the main face of Inside Gaming in a way. Kovic could often be seen as the person who represents the audience during gaming and gaming related arguments.

While on the Inside Gaming channel Kovic is most often the one who controls the games. Kovic is usually the one who suffers through the terrible games they play. While Bruce and James riff on the games in the background Kovic usually offers his opinion.

nonphotoshopped picture of Adam as a baby.

Adam and Munt in Sims 4 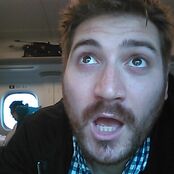 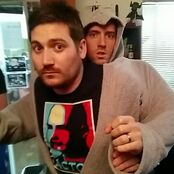 Retrieved from "https://inside-gaming.fandom.com/wiki/Adam_Kovic?oldid=6392"
Community content is available under CC-BY-SA unless otherwise noted.